Registration for this event has closed.

Program Description:
This 2-week workshop focused on topics bridging the areas of dynamics, geometry, and topology. It was held as a hybrid event with hubs at both the MATRIX Institute in Creswick, Australia and at the University of Regensburg in Germany. Talks were streamed via video-conferencing between the two campuses and many other mathematicians in other parts of the world were able to attend the talks virtually.

The informal collaborations explored applications of knot theory to the study of periodic orbits occurring in highly chaotic dynamical systems, such as the Lorenz system. Topological tools, such as Dehn filling and triangulations were applied to simple Lorenz links.

The attendance was well represented by students and the workshop was a timely opportunity for informal interactions, which was a privilege to treasure after many months of working from home. In the second week, each student gave a talk on their current research. It was unfortunate that international travel to Australia was infeasible, and this made for a smaller in person group than there would have been otherwise.

ASSOCIATED EVENTS
MATRIX Wine and Cheese Afternoon 21 February 2023
On the first Tuesday of each program, MATRIX provides a pre-dinner wine and cheese afternoon. Produce is locally-sourced to showcase delicacies from the region. 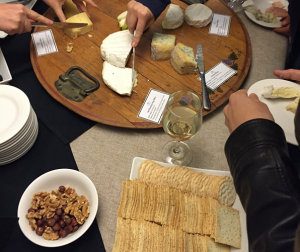