Miranda Chih-Ning Cheng is a Taiwanese-born and Dutch-educated mathematician and theoretical physicist at the University of Amsterdam. Miranda is known for formulating the umbral moonshine conjectures and for her work on the connections between K3 surfaces and string theory.

Miranda completed her master’s degree in theoretical physics in 2003 from Utrecht University, under the supervision of Nobel laureate Prof. Gerard ‘t Hooft. She completed her PhD in 2008 from the University of Amsterdam.

Abstract: Modular forms are ubiquitous in mathematics and also play a significant role in theoretical physics. Mock modular forms arise from a more flexible notion of modularity. What exactly this notion should be has puzzled mathematicians since 1920, when at the end of his life Ramanujan wrote down 17 functions that he called “mock theta functions” without giving any further explanation. Now, not even two decades after the modern definition was discovered, mock modular forms have already found a wide range of applications in various fields in mathematics and theoretical physics. After briefly introducing their properties, I will explain how mock modular forms appear in recent research in various areas including finite group representations (moonshine), string theory black holes, and three-​dimensional topology.

Please click here for the recording of the webinar. 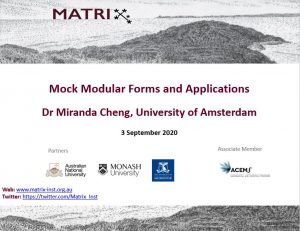